Predictions (winter session 2019 up to autumn session 2021): The accuracy of the prediction of the updated Gradient Boosting Classifier (GBC) model for the votes from the winter session 2019 until spring session 2021 is 78% as shown in the graph at the right side. The GBC model has replaced the original Lasso model described in the poster. Please also refer to the section ‚update‘. 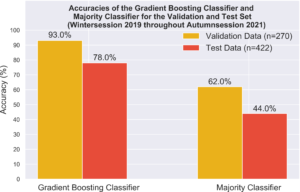 Fluctuations of accuracies: Predicting the outcome of the votes of the SNC is an ongoing process. The accuracy of the predictions underlies fluctuations and is generally around 80%. The accuracy is calculated after every of the four regular sessions of the parliament (including extraordinary sessions). The model is not updated after a new session.

Remark: Votes taken on ‚Affairs of the Federal Council‘ are excluded. Because these affairs always end up being accepted after many adaptations took place. These boards are therefore too predictive to be modeled (please also refer to the poster and the selection of the types of votes as well as to the section ‚my question‘).

The predictions of the votes taken by the SNC from winter 2019 to autumn 2021 are shown in the table below. 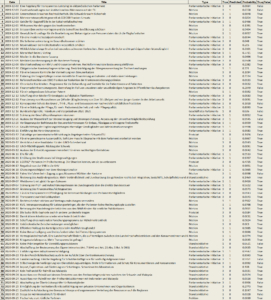 The meaning of yes and no in the votes and predictions: It is important to note that the true outcome of the vote displayed in the table above doesn’t always correspond to the effective outcome of the vote taken by the parliament. Very often the parliament does not vote directly on the matter at hand but on a recommendation of a parliamentary commission or of the Federal Council. For instance, if a commission recommends to reject a matter and the outcome of the parliamentary vote is „no“ , the matter as such is accepted. Accordingly, the model has been trained to predict whether a matter as such is accepted (yes) or rejected (no) ignoring the recommendations.

More information about the development of the model to predict the outcome of votes in the Swiss National Congress can be found by clicking on the image at the right side. 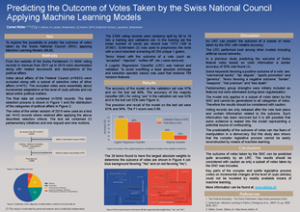